Do you suffer from On-Off-itus? 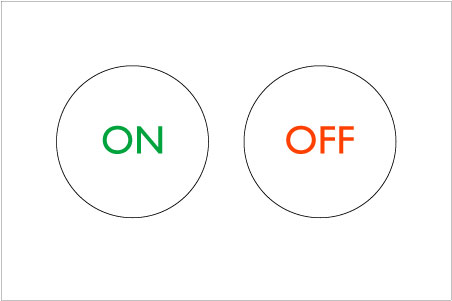 As a lifelong “dieting type,” I learned about being “on” and “off” of a diet from an early age. And I mean really early — from around first grade, when I began to show signs of gaining excess weight. Because of this, my parents — thinking it was for the best — put me on an overly strict diet. (Burger patty and cottage cheese, anyone?)

Even though very young, I realized that being “on” the diet that my parents prescribed was very different than when I was “off” of it. In fact, as a way to reinforce their strict eating rules, my parents removed all junk food and candy from the house and even put a lock on the cabinets containing crackers and other carb-esque contraband. (True story.)

We can debate my parents’ war against moderation all we want, but suffice it to say, I taught them a thing or two about being “off” of my diet. Not only did I start eating cake, candy and other kinds of junk food at every opportunity that presented itself (thinking I might never have such food again), I eventually began stealing money from my dad’s wallet in order to buy my own supply of sugar-tastic food from the local market. Of course, I could never let my parents find my secret stash, so I would eat most of it in one sitting (no matter how stuffed and miserable I felt afterward).

And the pattern continued. All the way up until post-college, during which time I weighed over 450 pounds. I know it was over, because my scale would only read ERR (short for “error,” I later learned after consulting the manual, since this particular electronic scale wasn’t programmed to register anything over a certain weight).

I’m happy to say that I eventually did take off all the excess weight (over 250 pounds of it) and have kept it off for over a decade. But along with healthy eating, plenty of exercise, getting enough sleep and drinking lots of water, I also had to tame my on-off-itus. And no, that didn’t happen easily. Even as I successfully dieted, I would have “on” days (on which I didn’t eat a morsel of food that wasn’t part of my eating plan) and “off” days (on which I would eat enough for two — myself and the state of California).

Being “on” or “off” usually leads to a cheater’s mentality. And that doesn’t serve us well whether we’re trying to lose the excess weight or simply working to maintain the weight loss.

It took years to retrain my psyche, but eventually I learned to “just have the cookie” if I really wanted one. Now, I should point out that we’re talking a cookie, as opposed to a bag of cookies (sprinkled over a vat of ice cream, in my case). The key is thinking like someone who eats and enjoys food in a healthy fashion. Yes, we really can have one cookie. Or one helping of potato chips (or whatever) on occasion and not wreck our commitment to eating healthy and looking amazing. And that’s because we can learn that unlike what we think when “on” our diets, we can have another cookie (or whatever) in the future, when a healthy opportunity presents itself.

Let’s face it — one cookie did not make us fat. It was eating whole bags full that did that. And much of our binge-worthy behavior is a result of the “on/off” mentality that being on and off diets has taught us over the years.

Remember that you and I are not trying to “cheat the system” by maintaining that old standard which dictates that being “on” a diet today means we’ll be “off” of it come the weekend. Instead, join me in learning that fine art of balance. Sure, that means sometimes saying “no” to decadent foods. And that’s because we want to be able to breathe after zipping up our jeans.

But at the next office birthday celebration, we can have a reasonable slice of cake. Not the whole cake. And not with a bevy of “secret licks of frosting” when no one’s looking. One delicious, treat-worthy slice of cake — and then we might even do a little power walk after we get home from work. That’s balance. That’s moderation. And that’s putting on-off-itus where it belongs — in our rearview mirrors.

Do you struggle with the “on/off” complex? Or do you have successful way of combatting it? I’d love to hear from you in the comments below. In the meantime, do me a favor and save a piece of that reasonably sliced cake for me.

Tags: candy, cheat, cheating, cheating on diet, cookies, diet, diet and nutrition, dieting, gregg mcbride, health, ice cream, junk food, just stop eating so much, Potato Chips Weight Loss, weekend, weight loss tips
This entry was posted on Wednesday, May 7th, 2014 at 9:24 am and is filed under Mood. You can follow any responses to this entry through the RSS 2.0 feed. You can leave a response, or trackback from your own site.

One Response to “Do you suffer from On-Off-itus?”