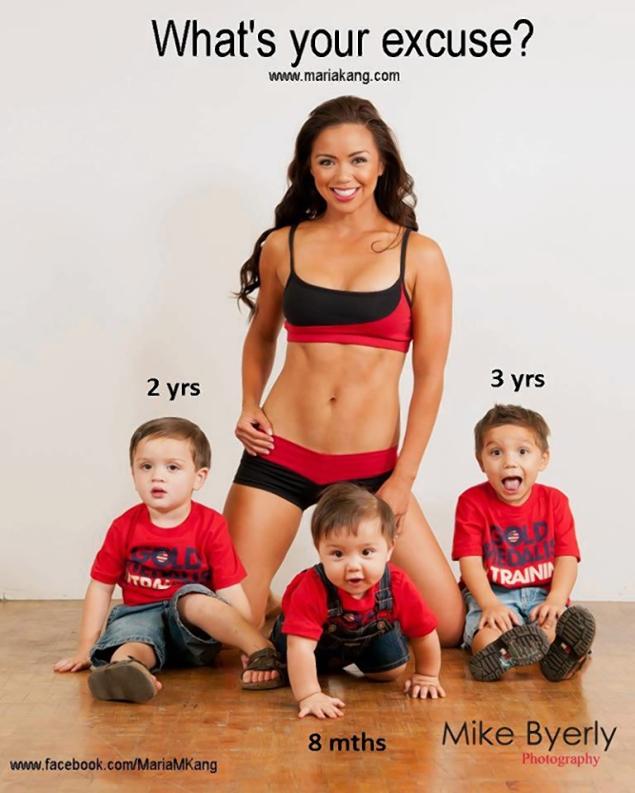 Recently a lot of hullabaloo has been made over the Sacramento, California-based mom who, in an effort to promote her fitness business with a provocative ad featuring her barely clad, post-pregnancy body (along with her 3 children), challenged other moms with the headline “What’s your excuse?”

Given the nature of the ad and the tone of the headline, a lot of those moms that Maria Kang was trying to reach have interpreted her message as one of bullying rather than inspiration. As you might have seen on the news (both local and national), many people are accusing Ms. Kang of shaming people rather than inspiring.

“I’ve been getting an influx of new followers, emails and comments (on my profile pic) recently. Some saying I’m a bully, I’m fat-shaming and I need to apologize for the hurt I’ve caused women. I get it. SO here’s my First and Final Apology:

I’m sorry you took an image and resonated with it in such a negative way. I won’t go into details that I struggled with my genetics, had an eating disorder, work full time owning two business’, have no nanny, am not naturally skinny and do not work as a personal trainer. I won’t even mention how I didn’t give into cravings for ice cream, french fries or chocolate while pregnant or use my growing belly as an excuse to be inactive.

What I WILL say is this. What you interpret is not MY fault. It’s Yours. The first step in owning your life, your body and your destiny is to OWN the thoughts that come out of your own head. I didn’t create them. You created them. So if you want to continue ‘hating’ this image, get used to hating many other things for the rest of your life. You can either blame, complain or obtain a new level of thought by challenging the negative words that come out of your own brain.

With that said, obesity and those who struggle with health-related diseases is literally a ‘bigger’ issue than this photo. Maybe it’s time we stop tip-toeing around people’s feelings and get to the point. So What’s Your Excuse? – Maria Kang”

Personally, I’m all for an “in your face” approach when it comes to getting people motivated to workout, eat right and get fit. As people with a dieter’s mentality, it can be easy to fall into the trap of “It’s just sooooo hard,” etc., etc. While many may not agree with Ms. Kang’s approach (and I’m not saying that I do), I don’t necessarily understand the firestorm that’s broken out regarding this story. Unless, of course, it was the intention from the start in order to generate some publicity. After all, we’re all talking (and blogging!) about it, aren’t we?

According to Hollywood Life, Ms. Kang claims she just wanted to inspire others with what some are calling a racy photo (given that her 3 children also appear in the shot), saying ““I have always been open, I’ve had a blog since 2007,” she told HollywoodLife.com. “I’m vulnerable and very transparent I don’t feel like I want to hide anything, to me it’s important to be real with yourself, and be real with others because maybe you are inspiring others.”

So what do you think? Is Ms. Kang a bully that’s attempting to shame other moms? Someone who really yearns to inspire others? Or someone who hoped this media storm would do just what’s happening — jumpstart her notoriety?

Tags: apology, belly, exercise, facebook, gregg mcbride, hollywood life, hot mom, huffington post, just stop eating so much, local, maria kang, mike byerly photography, national, news, pregnancy
This entry was posted on Wednesday, October 23rd, 2013 at 4:32 pm and is filed under Mood, Move. You can follow any responses to this entry through the RSS 2.0 feed. You can leave a response, or trackback from your own site.

One Response to “Hot mom or big bully?”