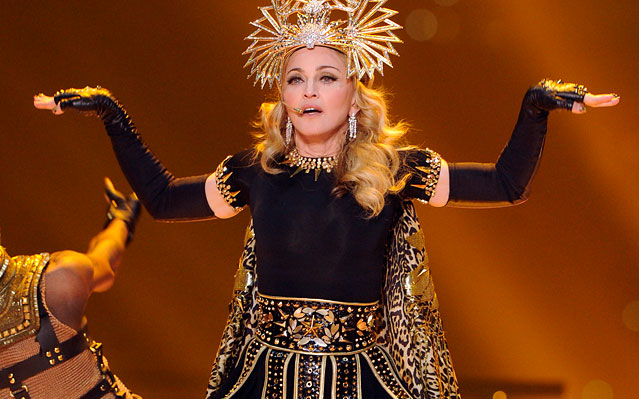 The Monday morning after Super Bowl Sunday I expected online chatter to be about the Patriot’s near miss of winning the game and the Giants fourth Super Bowl triumph. Instead, it seemed like most people were tweeting, posting and chatting about Madonna’s performance during the halftime show – the same topic they were discussing on the morning talk shows. What I found even more surprising is that much of the commentary was negative and even mean spirited. Many of the posts referred to Madonna as “Grandma” or wondered aloud as to ‘What rest home did she escape from?’

Now, whether or not you’ve ever been a Madonna fan, you can’t knock her for her dedication to her craft. The woman aims to entertain and works to achieve that on all levels. So what if she was lip-syncing? Between the choreography, the dazzling video screens, the incredible light show and the fun guest appearances (finger flipping M.I.A. aside), there was a little something for everyone.

And yet after Ms. M’s performance, much of the online banter has been super negative – focusing on her small misstep as well as her (supposedly) “old” age. Certainly everyone is allowed to have his or her opinion. I not only respect that, I applaud it. But I have to admit that this stinging commentary was leaving a bad taste in my mouth – and that’s because it reminded me of the negative banter (against myself) in my head (both before and after taking off 250 pounds of excess weight).

Let’s face it; a negative mindset is a negative mindset. And it’s mean commentary (as opposed to productive critique) that leads us all to feel inadequate about our weight, or when wearing a bathing suit, or when feeling our age or even when performing for millions of people during a Super Bowl halftime show. If everyone’s cutting down Madonna, we can’t help but wonder what they might be saying about us.

To me, this begs the now tried-and-true question… Can we get along? And that request applies as much to our inner dialogue as the outer one.

When I was heavy and weighed in excess of 300 and eventually 450 pounds, I was very mean spirited. When I ventured outdoors, I was armed with my biting wit and acid commentary, which I would gladly share with whomever I happened to be with (when talking about anyone who was in the vicinity – no matter how innocent they might have been). I could always find something to make fun of about someone – no matter how perfect they appeared (which is what was probably setting my insecurities off in the first place).

Looking back, it’s clear that I was feeling so insecure about my own body and appearance, that I was determined to cut down anyone else I came across, in order to (what I thought would) level the playing field. Friends who knew me then (and still know me now) always remark about how my take on life – and people – changed when I finally lost the weight (in that I became a more caring and accepting person).

Perhaps the worst part about my former attitude is that as much as I aimed my vitriol toward the outside world, I focused the same venom on myself inside my own head. Whether critiquing how I looked, what I was wearing or what I was eating, I thought of myself as worthless and undeserving. And that was not helpful to my quest to be healthy (both mentally and physically).

So when I experience group annihilation of performers like Madonna, it takes me back to my own critiquing era, which acts as a good reminder of where I never want my headset to be in again – ever.

As for Madonna, who cares if she’s had one too many facial “procedure”? She can still be quite an inspiration in regard to staying fit, vital and active well into one’s so-called “middle age.” If that’s not inspiration, I don’t know what is. Whether a fan of her music or not, doesn’t she deserve at least a little respect? The same respect and acceptance that we should be giving others – not to mention ourselves?

I urge you to join me in paying close attention next time we’re harshly criticizing someone. Chances are, we’re giving ourselves the same dialogue. And none of us – none of us – deserve it.

Whether we like her new song or not, let’s take the title to heart: “Give Me All Your Luvin’” – indeed!

Tags: Giants, Halftime, Harsh critique, inner dialogue, lip syncing, M.I.A. middle finger, Madonna, mean spirited, Patriots, Super Bowl
This entry was posted on Thursday, February 9th, 2012 at 10:24 am and is filed under Mood. You can follow any responses to this entry through the RSS 2.0 feed. You can leave a response, or trackback from your own site.

2 Responses to “Open your heart”