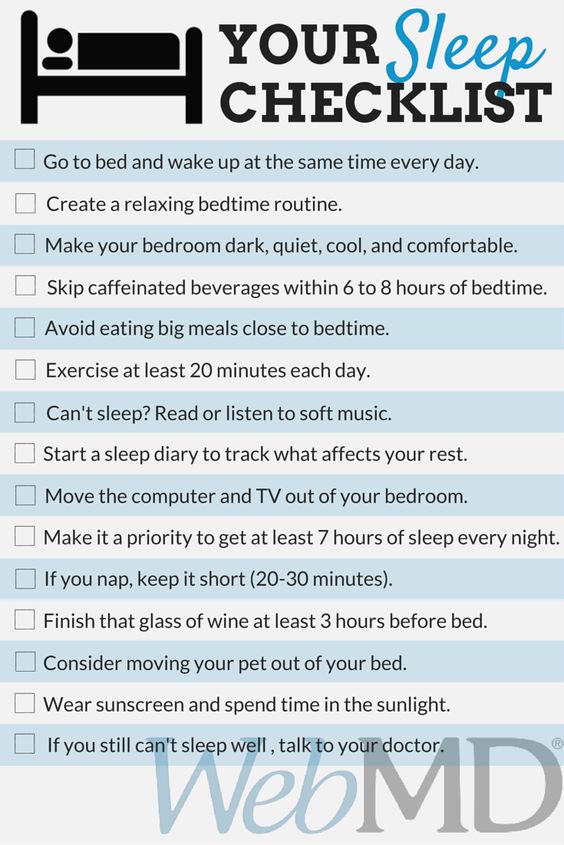 Longtime readers know that I’m always reminding people wanting to lose excess weight that getting enough sleep is one of the four tenants to lasting health (along with healthy eating, exercise and drinking enough water). But for many of us, getting a good night’s sleep is something that’s easier said (and/or dreamed about) than done. What seems like a 24-hour work cycle keeps us all on our toes night and day. And many of us end up robbing much-needed rest time in order to be able to accomplish everything we “need” to get done. But make no mistake, sleep is essential.

WebMD has this Sleep Checklist, shared above, that might prove beneficial to those of us wanting to improve our sleep habits (and time). Although I must point out that my loyal sidekick, Latte, does not agree with the third tip from the bottom. But as with any check- or idea-list, we can pick and choose the suggestions that resonate with us and ignore the rest. Even so, there are some good ideas here for catching more Zzzzs and improving our overall health. You can read more about WebMD’s Better Sleep Checklist by clicking here.

And to all? A good night!

Bite this, not that 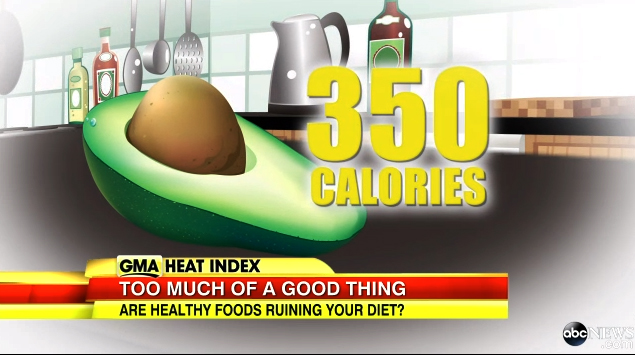 I’m not one to vent. Or to rant. But every now and then I see something in the media that really burns my britches. This very thing happened recently one morning while watching Good Morning America. During the broadcast, they aired a story featuring “America’s get-real nutritionist” who was putting down healthier foods based solely on their calorie count. While giving her advice, Rachel Beller (author of the book Eat to Lose, Eat to Win) barely mentioned the nutrient content, fullness factor or overall wellness effects of the foods she was warning dieters about.

Sure, the message of the piece was portion control, which is always a great reminder for us all (myself included). But for Ms. Beller to insinuate her girlfriends were bad examples after seeing them at a party having two glasses of potentially beneficial red wine based on the “fact” that having two glasses of red wine the same as having two candy bars is just ridonkulous when you consider the nutritional value of the two and what your body can potentially do thanks to those “calories.” Luckily, one of the GMA anchors, Dan Harris, pointed this out at the end of the segment. But still…by then the damage was done to many of us with a dieter’s mentality.

Too often books like Eat This, Not That (also occasionally featured on Good Morning America), show off a large amount of donuts as being the calorie equivalent of something that’s healthier and better for you. I know the goal is to sell books and get into the news. But this is part of the reason that America is getting fatter and fatter. We’re being fed misleading messages that derail our efforts to not only look better on the outside, but feel better (and be healthier) on the inside.

Avocado, raw nuts and red wine can all be very good for us when consumed in moderation. Is there fat in the Avocado? Sure. Are there calories in the nuts? Of course. Should red wine be consumed in moderation if okayed by your doctor? Naturally. But to compare these foods to donuts and candy bars as being the same amount of calories is really misleading and even potentially dangerous.

There’s no rocket science required for losing weight and getting healthy. All together now: Eat less. Move more. Drink plenty of water. And get lots of sleep. And be sure to include delicious, natural and unprocessed treats from nature in your diet whenever possible. And P.S. This isn’t to say you can’t enjoy a candy bar or even a donut every now and then — but I suggest not doing it at the expense of some of nature’s (key word) healthier choices.

Common sense. Sounds so crazy it just might work!

(Have there been any recent diet or health stories that have left you frustrated? If so, tell me all about in the comments section below. Together, we can take off a little steam!)