A fast that’s actually good for you 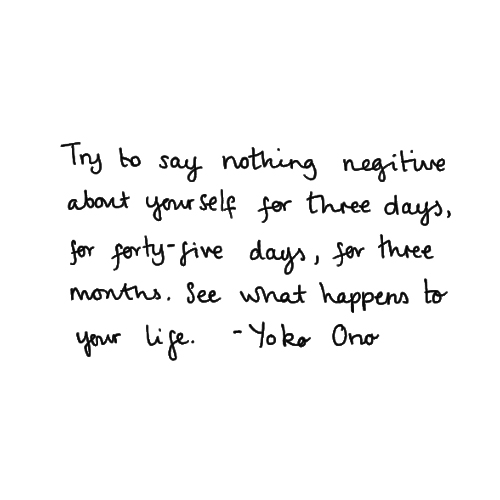 I’m generally not a fan of diet-related fasting of any kind. However, when I read this quote from Yoko Ono, I was suddenly very much in favor of this kind of fast. A fast from negativity about our own selves.

Doing this might seem easy at first. But try getting through even just one hour without being negative about yourself or your body (in your own head). It’s surprising how often I’m reminded that my most “vocal” critic is actually that little voice inside my head. Can anyone else relate to this? I imagine the answer is, “Yes.”

So why not try and ignore that little voice? The one that tells you your body’s not perfect? Or the one that tells you you’re not lovable? Or the one that says you should be further ahead in your career? Whatever kind of negativity your mind is offering about yourself, ignore it. Try to shut that voice down. And this includes shutting down actual talking out loud about ourselves (in a negative fashion). I can’t tell you how many times I’ve complained about my body or my so-called “failures” to friends and family (often making myself a punchline).

What we say to and about ourselves matters. We hear it. We feel it. It becomes part of our psychological makeup on every level. So it only make sense that changing that “voice” from negative-speak to positive-speak would have a healthy (and happy) impact on our lives.

So why not join me in taking Yoko Ono’s good advice? If doing it for three days seems like too much, try doing it for just an hour, and then build upon it from there. The psyche you save may be your own.

(And remember: no matter what your health-minded goals are, you are beautiful and perfect in this very moment! The sooner you recognize this, the sooner any kind of goals can be achieved!) 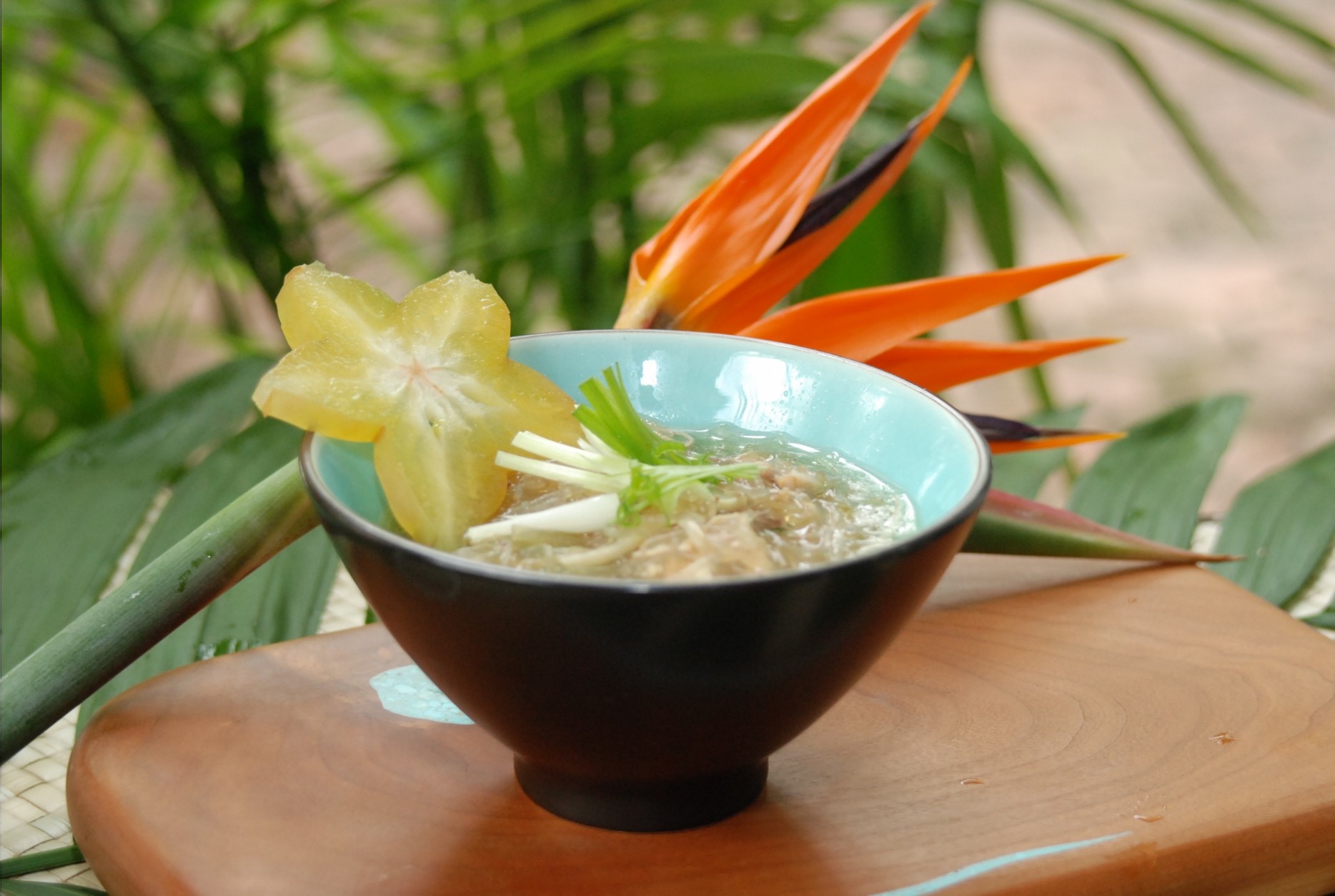 For some reason, “comfort food” is something I associate with cold winters, cozy fires and flannel. It’s food you eat to warm you from the inside and that reminds you of all the best parts of being a kid. Living in Houston, even the idea of flannel is making me break out into a sweat! But it is October and, based on all the pictures of friends who live in more northerly climes, it’s cool somewhere. So for those of you who get to enjoy the cooler season, here’s a recipe for Chicken Long Rice, excerpted from my collection of family recipes published in Luau Like a Local: The Easy Way.

I’m sure you’re confused by now. Why am I writing about a so-called “Hawaiian-style” soup, cold winters, and comfort food from Houston? Well, I actually grew up much like Gregg did. In fact, we went to the same high school in Wiesbaden, Germany. His family was military and mine was civil service. My father hails from Honolulu, HI. And though my mother (and co-author) was born and raised in Brooklyn, NY, she learned how to cook from my dad’s mom, who was also born and raised in Hawai’i. So really, I did eat this as a kid in cold climes like Korea, Colorado, Germany. And even in Hawai’i. Because let’s face it: chicken noodle soup is wonderful no matter what time of year!

What started out as an ad hoc effort of collecting as many recipes as possible from my mom for my own use, resulted in me deciding to organize a few of them in some fashion. And I wasn’t sufficiently motivated by merely capturing the recipes, so I promised her that for all the work we were doing to actually measure her “put in some” or “just a skosh” or “to taste,” that I would publish the recipes. That was eight years ago. I finally made good on my promise in March when I self-published Luau Like a Local.

There is a native Hawaiian cuisine but really it has evolved to include the food of the various ethnic groups: Japanese, Chinese, Filipino, Portuguese, Spanish, and more. This particular dish is actually Chinese. And while I promise the easy way (you could really just use store bought chicken broth and pre-cooked chicken, shredded), this recipe is how mom makes it. It’s not particularly hard at all. And is perfect for whatever may ail you!

This is not as soupy as a typical chicken soup. When served, the bowl should be bursting with noodles and chicken.

Prep time: 30 minutes (10 minutes before, 20 minutes during)
Cook time: 1½ hours
Servings: 8 as a side dish (or 2 for dinner, maybe with some leftover for lunch)

3. Bring to a boil and simmer about 45 minutes to an hour, or until the meat falls away from the bones.

4. While chicken is cooking, put long rice in a large bowl with hot water to soften.

8. Simmer until about half of the broth is absorbed. Season with soy sauce, salt, and pepper to taste.

Excerpted from “Luau Like a Local: The Easy Way” by JoAnn and Susanna Takasaki. Used with permission.

About Luau Like a Local: The Easy Way:
Within 24 hours, Luau Like a Local: The Easy Way went to #1 on Amazon in Hawaii cookbooks. The reviews have all been 5-stars with praise for the gorgeous photography (by Toman Imagery), humor, and the well thought-out planning guide and shopping lists. “I found the recipes to be very clear, with options for doing things the traditional way or the more practical way for those of us with small kitchens and no access to exotic food markets. The photos are gorgeous and the shopping list at the end was incredibly helpful!” wrote one Amazon reviewer.

About Guest Blogger JoAnn Takasaki:
JoAnn Takasaki (pictured here, right, with her mom) started writing about food with two columns in the new Midtown Paper back in 2003. She decided to make the jump to full time writing in 2004 in hopes of “being paid to eat and get massages around the world.” While she didn’t exactly realize that dream, she did end up writing the Houston destination guide in AirTran’s “Go!” magazine for three years and her restaurant and bar reviews were syndicated out to many hotel and travel sites including AOL and Yahoo! Travel. She gained enough notoriety to catch the eye of then Executive Producer Geoff Roth of FOX26 Houston News and was the first Houston Food Blogger to be featured on the evening news in the popular segment. In 2011, she decided to focus her efforts on growing her Houston-based copywriting and content development agency, GlobalWrites, but she still has a bit of a foodie following on Facebook and Twitter. You can keep up with the latest developments for “Luau Like a Local” on the Facebook page or by searching #LuauLikeALocal.