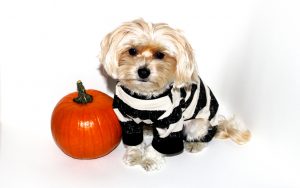 If you hear a blood curdling scream this week, rest assured that it’s not an extra from The Walking Dead or someone watching a scary movie marathon. That’s me walking near the candy aisle while at the grocery store during this time of year. And like me, many of us with a dieter’s mentality fear the Halloween season with the same kind of dread we do a visit to the dentist or (gulp!) getting on the scale after a weekend of gastronomical debauchery.

But fear not! All Hallows Eve actually has no power over us or our waistlines… Unless we give it said power. And for the record, this is the year we’re taking back Halloween and making it more treat than trick.

For starters, let’s remember we’re talking about a 24-hour period. And guess what? Even if you’re on a diet plan and committed to getting rid of your excess weight, a few pieces of candy eaten in moderation (key word!) is not going to harm you at all—especially if you combine the munching with an extra lap or two around the block (and/or shopping mall if the weather outside is frightful).

As dieters, it’s our denial of foods we love that often leads to excessive bingeing. So if you really want to indulge in some sugary goodness, then choose some well-made candy (meaning it’s full of all-natural ingredients as opposed to a list of additives that would make even a mummy unravel). When I took off over 250 pounds of excess weight over a decade ago, it was through moderation as opposed to starvation or denial. Too often we turn favorite foods into a forbidden fruit that we then become obsessed with eating.

Another tactic that makes Halloween more spook-tacular is focusing on non-food related enjoyment. This is easy given that most people enjoy dressing up. And no, you don’t need a costume party to do so. A lot of workplaces allow employees to dress up for work when Halloween hits on a weekday. Or just throw on a pair of vampire fangs when you’re running your errands to suck up a whole bunch of smiles (if not second glances).

If you need an actual party as an excuse to don a costume, then throw a last minute soirée yourself. Get inventive with the theme: ’80s TV shows? Favorite movie detectives? Inanimate objects? Make October 31st more about the fun than the food. And if you’re throwing the party, you can schedule nutritionally sound games like bobbing for apples or pin the tail on the werewolf.

And believe it or not, actual trick-or-treating can scare away fat itself. Volunteer to go along with a group of neighborhood kids. Or take your own kids to the mall and be willing to make several rounds with them. Kids’ energy is high on Halloween—and not just due to the potential sugar rush. It’s fun to dress up. It’s fun to say “Boo!” And it’s fun to walk and walk and walk. (Remember the rules for even healthier walking: suck that tummy in, pump those arms and maintain a healthy posture.)

Last but not least, go easy on yourself. Even those strange, mythical “I can eat anything I want and not gain weight” creatures (much more unexplainable than zombies if you ask me) will be complaining on November 1st that they overdid it on the candy. The difference between them and us (the ones with a dieter’s mentality) is that they don’t feel compelled to keep eating the candy on the day after Halloween. They did it. They enjoyed it. They regret the extra nibble or two and now they’re moving on, mentally—just like we can do, if we give ourselves that kind of freedom.

Besides, November 1st heralds a whole ‘nother eating holiday’s approach. So it’ll be time to stop thinking about the season of the witch and wondering how we are going to construct a healthy game plan for gobble-gobble day. Although I’m here to tell you that as is the case with Halloween, the only thing to fear is… Well, you know the rest (in peace).

Tags: all hallow's eve, blood curdling scream, candy, dentist, diet, dieter's mentality, dread, eating, excess weight, fear, food, for the record, fun, halloween, healthier, love, marathon, moving on, november, pounds, scary movie, scary movie marathon, scream, season of the witch, shopping mall, the day after halloween, the walking dead, walking, walking dead, workplaces
This entry was posted on Tuesday, October 25th, 2016 at 11:59 am and is filed under Food, Mood. You can follow any responses to this entry through the RSS 2.0 feed. You can leave a response, or trackback from your own site.